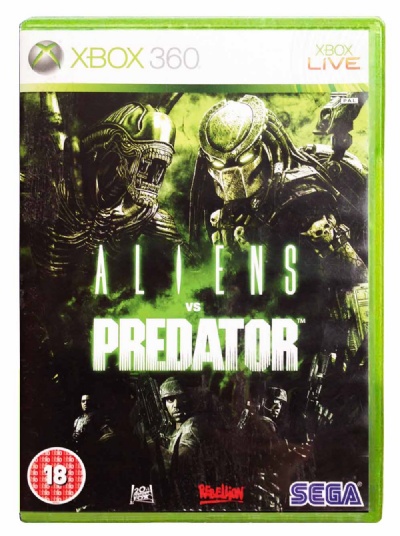 Aliens vs Predator is an update of the 1999 PC game Aliens Versus Predator, in which the player can choose either Marine, Xenomorph (commonly known as Aliens) or Predator in a first-person shooter. The story takes place on the planet designated BG-386, in a mining colony owned by the Weyland-Yutani Corporation where they have found a mysterious site; an ancient pyramid that depicts an unknown alien race and the Xenomorphs. Curious, they decide to forcibly open the doors and cause a massive energy backlash that causes the power on the entire planet to go out, unleashing hell in the process. This is where the story begins for the three factions:

Marines: The player takes control of the "Rookie" as they are dispatched to the planet to investigate the distress signal. Once arriving they realize that a Alien outbreak has occurred and the player must traverse various environments. There are various weapons such as a pistol, pulse rifle, sniper rifle, flamethrower, shotgun and the smart gun the player can use against the various enemies scattered throughout the stages. There is also the iconic motion tracker that can pick up on enemy movement, flares and a flashlight for seeing in very dark spaces and stims that will replenish their health.

Aliens: The player takes control of an Alien nicknamed "Six". Captured and raised by Weyland-Yutani scientists, Six has been hearing the call of the Matriarch for a period of time, desperate to escape and join his brethren. When the power in the colony goes out, Six escapes and begins to wreak havoc against the humans and propagate his species across the planet. The Aliens are considered very weak and vulnerable and only have their claws and tails as weapons, but possess great speed and the ability to climb on walls and ceilings. Health can automatically regenerate, but the player can bite the head of a fallen enemy to automatically regenerate their health.

Predators: The player takes control of a Youngblood; fresh from training he receives word from the Predator council that a distress signal from a long lost hunting ground has been set off. He is then dispatched to the planet to investigate, upon arriving he discovers humans have taken over the planet and unleashed the serpents (The term the Predators use for the Aliens) upon the planet. The council orders him to wipe out the human and alien presence and discover the secret of the hunting grounds. Weapons include the Plasma Caster, Wrist blades, Combi-Stick, Mines and the Smart Disc with health being replenished through shards. The Predator can also leap across long distances, mimic voices to distract victims away from groups and use their signature cloaking device to move through enemy encampments without being detected.Along with the single-player campaign there are also several multiplayer modes including:•Survivor: A group of four marines surviving against waves of advancing aliens.

Predator Hunt: Out of a group of Marines one will be chosen to be the Predator, the goal being that the player can use the Predator to gain extra points through killing other players and extend the time limit of being the Predator. If a Marine player can kill the Predator then they will become Predator until they are killed or time runs out.

Infestation: Similar to Predator Hunt, out of a group of Marines one will be chosen to be an Alien, the goal of being to kill the Marines and earn points. However, when an Alien player kills a Marine then that Marine will become an Alien and join that player.

Species Deathmatch: Three groups of players use teamwork to take out the other teams of the opposite species, basically Marines vs. Aliens vs. Predators.

Domination: A group of players vie for various strongholds scattered throughout the map, the goal of which to take these points and reach a certain point count to win the match.