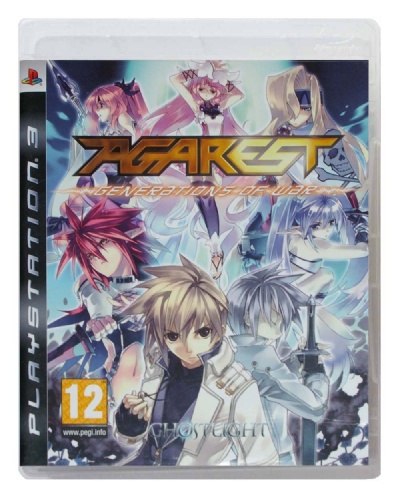 Agarest: Generations of War (also known as Record of Agarest War) uses a traditional backdrop scenario: forces of ancient evil awaken and the player character, initially the military officer Leonhardt, has to save the world. He is forced to make a deal with the mysterious Dyshana which gives him the power to fight evil; in return he and his decedents are condemned to seal it away for all times. The plot is told in five chapters which all have different player characters (who are the son of the previous character). During the first four generations, the player deals with different women and the choices in cutscenes and dialogues determine how affected they become to the hero. At the end of the chapter, he mates with the woman with the strongest bond (or gets to choose if he has a positive relationship to more than one) and this has a direct influence on the appearance and statistics of their son. Additionally there are many other choices to make (mostly either tactical or moral) which have an effect on the story (sometimes cross-generational) and the player's morality which influences which non-player characters join the party.

Combat is turn-based and takes place on flat, rectangle-based fields. In each round (which is divided into movement and action), the player gives orders to the party (up to six members) and every action costs action points. The most important tactical aspect is positioning: some fields give either positive or negative effects and each character has a sphere of influence, depending on their jobs either near around them (melee fighters) or more far away (ranged fighters and magicians), which is also dependent on their viewing direction. Characters which are connected over those spheres gain substantial bonuses and can perform combo attacks. Except the boss battles, fights are mostly resolved within a few rounds because unused action points carry over to the next turn and the characters' "Break State", an especially powerful attack, unlocks after enough time has passed. Already won battles can be repeated and there is an auto-combat option available.

Fighting battles rewards experience points (although only when the character is left standing when the battle ends) which eventually lead to level ups. Then the character gains bonus points which are divided on abilities (strength, vitality, agility, intelligence and luck) which influence derived statistics and, depending on the characters' starting proficiencies, require more or less bonus points to improve. Additionally each character equips skills (each character has a speciality for one of the 12 types) and other equipment (weapons, armor an accessories). One skill allows to capture monsters which in turn can be used as party members, combined with each other to create new monsters or simply exchanged for items.

Between battles, the player uses the world map to travel between points of interest: cities, quests, plot event points and battles. Quests are basically compact dungeons with random battles, chests with items to find, a boss to kill and no saving or healing opportunity. While sometimes plot events occur in cities, they are mostly a hub of useful facilities: shops (buying and selling items), blacksmith guild (crafting or enhancing equipment), adventurer's guild (researching new skills), monster guild (for the monster hunting actions) and alchemist's guild (resurrecting party members which left the group for story reasons as marionette only used for fighting). There is some mild adult content (suggestive dialogue, female characters in skimpy outfits and erotic positions), but no nudity.