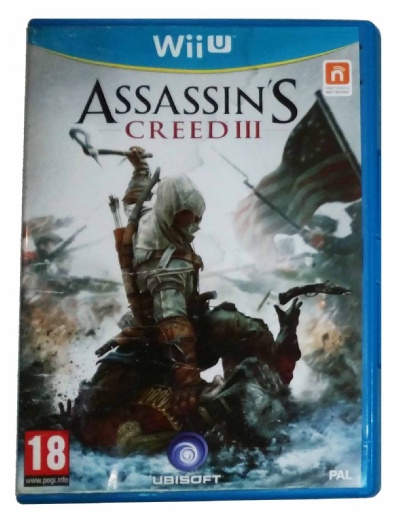 Assassin's Creed III is a historical open world action-adventure game with a focus on stealth. Despite the numbering it is the fifth main game in the series and a direct sequel to the previous game Assassin's Creed: Revelations. After the events of the previous game the series' protagonist Desmond Miles travels with father William and the two companions Rebecca and Shaun to a cave in New York where they have located a temple made by the members of the First Civilization. Using the Apple of Eden, Desmond is able to activate a large part of the equipment. It was built to help protect Earth against a solar flare that threatens to wipe out the planet. Desmond falls into a fugue state however and is brought into Animus, the virtual reality machine that allows him to experience his ancestral memories. He will use Animus to find the answers for the First Civilization's warning, and the threat posed by the Knight Templars and their modern day organization Abstergo Industries.

From that initial modern day environment the rest of the game is largely set in Colonial America, before, during and after the American Revolution from 1753 to 1783. The main protagonist for this game is Ratonhnhaké:ton (Connor), a member of the Mohawk tribe. He is only introduced after a substantial portion of the game as it first follows his father, the Londoner Haytham Kenway, who travels to America after killing an Assassin in the London Opera. The player experiences the gameplay of the opera killing, the journey on the boat, and the arrival in Boston. Haytham is a Templar. He stole a key in the Opera and works together with five men loyal to his cause to locate a storehouse the medallion key is for. As he also gets involved in the local events, he meets the Mohawk woman Kaniehti:io (Ziio) and she gives birth to Connor. The game then offers 30 years of Connor's life to play, from his childhood with the Mohawk tribe through the training to become an Assassin after his village is attacked by the Templars under the command of his father. The Assassin-Templar war then becomes part of the American Revolution.

The open world environment is introduced as soon as Haytham arrives in Boston. Eventually the player also gets to explore New York, the Mohawk village, a large part of the American Colonial Frontier, various settlements such as Lexington, Concord and Charlestown, a brief visit in Philadelphia and the entire Eastern seaboard during the naval missions where Connor commands the warship Aquila. Various historical figures are met along the way and all information about characters and locations are described with a humorous tone in the Animus database. As almost all of the game is played out in a virtual reality environment, sections can be reloaded quickly and often small wireframe-like glitches are shown to remind the player it is just a simulation. There are however also missions with Desmond in the present day world where he needs to retrieve power sources in countries such as Italy and Brazil to open the temple gate.

Next to the main storyline there are various optional missions and tasks that are found by exploring the environment. The fighting system uses melee and ranged weapons with various actions to disarm, attack, parry, fire and assassinate based on the equipped weapon. Counter attacks are new and shown in slow motion to make room to strike. Ranged weapons such as muskets and rifles are new to the series and they have a considerable reload time. The free running movement to climb almost any building or obstacle has been modified to tie the different actions into a fluid motion by keeping a single button or key pressed. It is however still possible to deviate with different actions at any moment to choose a new path. Hiding places now include mobile vehicles such as haystacks in wagons that can be used to sneak up on enemies. Disguises can be worn to fool soldiers, but not the officers. There is a three-tier notoriety system where becoming incognito involves running away and hiding, but also tearing down wanted posters and bribing town criers. All computer-controlled characters have their own routines and this is now influenced by the weather as well, with a day-and-night and seasons cycle.

Next to the gameplay that returns from the earlier games this title introduces hunting and trapping animals in the wilderness to sell the skin. A large part of the game can also be spent building the settlement Davenport Homestead. Starting out with a single building, NPCs called artisans can be convinced to settle near the Homestead. This brings raw materials and facilities that can be used to craft. Raw goods and crafted items then form a local economy where the player can decide to sell them through land caravans or via sea convoys. Progress in the homestead is also shown visually with new people working and buildings that appear. Artisans receive upgrades after completing missions for them and this provides better equipment and weapons. Money is earned through the Homestead economy, but also by discovering hidden chests, selling spoils of hunting, looting opponents and pickpocketing. There are also tools to pick locks through a short, interactive sequence. Another, very different part is played on the The Eastern seaboard with naval campaigns. Connor has to command the ship through sails, cover and cannons in full naval combat and with a large amount of upgrades available for the ship over time. The game also contains three historical board games that can be played on the ship, in the cities or the Homestead: Bowls, Morris and Fanorona.

Additional challenges are unlocked by joining the three clubs: hunting, brawling and thieving. These each offer optional goals in different tiers. Other quests involve hunting down optional trinkets, collecting almanac pages and feathers, delivering letters, performing assassination contracts, synchronizing view points and more. Each of the three large environments (Boston, Frontier, New York) needs to be freed from Templar influence by liberating districts. Liberation reduces the taxes for Homestead convoys. To maintain a presence up to six people can be recruited and their skills (assassination, bodyguard etc.) can be called upon in times of need. Companions can also often be instructed with basic commands. When not needed, they can be sent out to other states to complete missions on their own and they bring back a lot of money and rewards. Through these missions their skills are upgraded, lowering the risk towards success. The three areas contain forts that can be captured to drive out other nations.

Multiplayer includes 12 different game modes and is presented as an entertainment product of Abstergo Industries. Next to the standard offerings there is the cooperative Wolfpack mode where up to four players work together through 25 stages to kill NPCs with a time limit. Another is the Domination team mode where the Animus game console is used to capture areas of a virtual map and protect them from the opposite team.

In the Wii U version the gamepad is used to display the in-game map and players can also use it to equip different weapons quickly.