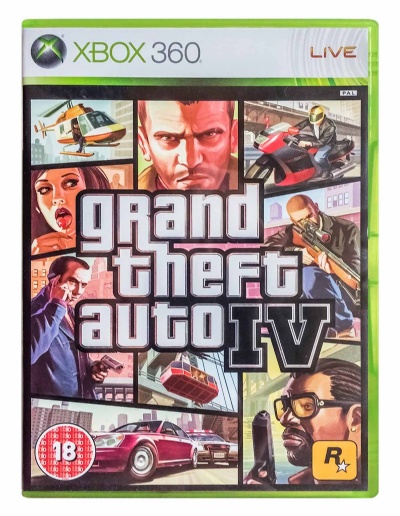 The Serbian ex-soldier Niko Bellic had witnessed the horrors of war, which turned him bitter and cynical. Disappointed by life, he immigrates to the United States, which his cousin Roman enthusiastically describes as a country of wealth and pleasure. However, the reality is quite different: Roman is poor, has no stable job, and owes money to some dubious individuals. As Niko attempts to help his hapless cousin and pave a more secure future for both of them, he becomes more and more involved in the life of crime. A burning desire to find a man who had betrayed him in Serbia forces Niko to make deals with his conscience, and once he crosses the line, there is no way back...

Grand Theft Auto IV is the ninth title and the fourth main game in the Grand Theft Auto series, and also the first for the seventh generation of consoles. Following the tradition of the 3D installments of the series, the game is entirely located in one of the three cities of the original GTA, Liberty City, but now in present time, and with an environment reminiscent of GTA III, though bigger and more detailed. Liberty City is heavily based on New York, where the protagonist has to gain respect, welfare and power throughout the game.

Like in most GTA games, the city map is gradually uncovered during the course of the game. The player starts in Broker (based on Brooklyn), and, in order to access the other three districts of the city (based on the other major boroughs of New York City), has to make progress in the storyline. The game has the usual structure based on missions. The player can sometimes engage in various missions at the same time, and has free access to the non-mission features of the game while being on one.

Most of the usual elements of exploration and interaction with the city are included in GTA IV. Niko can cause mayhem in the city, hijack cars, listen to radio stations, observe the behavior of the citizens, enter thematic buildings, work as vigilante, taxi driver, or ambulance driver, hire a prostitute, go to a strip club, and so on. Among the new features is the possibility to watch television (with several channels broadcasting various fictional programs) and connect to a fictional Internet, with functional websites (mostly of a humorous nature) created specifically for the game, and an e-mail program. Other additions include looking for criminals in the police department database from a police car, hiring taxi cabs to safely travel to selected destinations, extensive usage of the mobile phone, improved A.I. of the pedestrians, and others.

Some features from the previous games are missing, such as drivable airplanes and a few other vehicle types. Niko retains the ability to swim and engage in romantic relationships with female characters, features first introduced in San Andreas. However, the light role-playing elements (training to increase stamina, eating, etc.) from the previous entry have been removed.

GTA IV focuses on third-person shooter gameplay more than the previous installments; most of the missions have larger portions dedicated to on-foot navigation and shooting. Crouching, leaning, and taking cover play a more important role in combat. Hand-to-hand combat has also been re-designed, Niko being able to execute more precise moves.

The game uses the euphoria motion engine, an alternate middleware solution much like ragdoll physics, which makes all people in the game world move realistically depending on the situation around them. For example, every time Niko enters a car, a different animation will be generated depending on his position relative to the car.

A new feature compared to the predecessors is the multiplayer. The same free-roaming environment is offered for up to 16 players in 15 modes. Certain modes narrow down the environment to make sure players remain somewhat in each other's vicinity. Compared to the console releases, the Windows release features high resolution graphics, a video editor to capture and edit in-game footage, and the possibility to customize the radio station Independence FM with own songs.