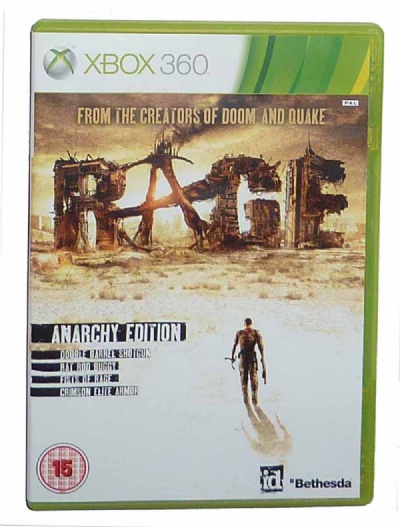 Rage is id Software's first major first-person-shooter since Doom 3, and the debut of the id Tech 5 game engine. Tech 5's major feature is use of Megatexture technology, essentially allowing for more efficient use of limited memory. As such, Rage is the first id game created predominately with consoles in mind.

Rage takes place an unspecified time after an asteroid strikes the Earth and obliterates all life. The player is a member of the "Ark Project" - a massive undertaking prior to the meteor's impact that placed valuable personnel into underground pods. The pods were meant to keep these VIPs in stasis until the impact's effects had passed, and then release their crew out to repopulate the world. The player awakens as the sole survivor of their damaged pod, and many decades after society had already started to rebuild. The player thus sets off to assist what settlements they find, and avoid The Authority - a mysterious governing force that wants to capture the player to harvest the nanites placed in their body as part of the Ark Project.

Settlements and similar playable areas are connected by an overworld called The Wasteland. The player gains access to buggy-style vehicles to traverse the wastes, and can also engage in specific races and vehicle combat. Players take missions from job boards and friendly NPCs, drive to the appropriate area, and use traditional FPS skills to dispatch any enemies and/or retrieve necessary trinkets from the enemy's lair. The player's health regenerates when not taking damage, and should the player be knocked out, they have a limited charge of defibrillators (activated through a brief minigame) to revive themselves.

Character progression is not present, and the player learns no extra skills. However, they can purchase and upgrade both vehicles and weapons. A one-time choice of armor also allows the player to pick one permanent bonus. Objects can be looted throughout the mission areas of the Wasteland, and are clearly marked as junk, useable, or crafting items in the player's inventory. Crafting can be done from anywhere, and is a simple matter of having the right recipe and the necessary parts - both of which can be bought or found. Crafted objects include lockpicks, ammo, bandages, lethal boomerangs called "Wingsticks," and more elaborate gear like sentry turrets and controllable RC bomb cars.

The player can also earn money through various minigames around the wastes. These include participating in an racing circuit, taking part in an arena battle called "Mutant Bash TV," and playing a simplified holographic board game. A collectable card game is also featured, with the player able to find new cards hidden in the wastes. The player builds a deck before each game and pits it directly against the cards of their opponent.

Rage features no traditional "deathmatch" multiplayer. Instead, competitive multiplayer takes place entirely through vehicle-based modes similar to those in the main game. Players drive armed buggies against their opponents in various racing and collection challenges. Players can rank up in multiplayer, granting access to new vehicles, weapons, and boost items. Cooperative multiplayer offers a variety of "Legends" to play online or local split-screen. These are short stories based on characters and areas from the single player game, which have no impact on the single player campaign itself.