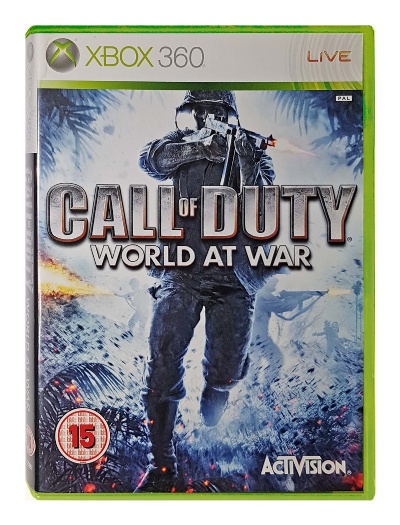 Call of Duty: World at War is, like its predecessors, a straightforward military first-person shooter with authentic weaponry like the Thompson Sub Machine Gun or the Arisaka Rifle Type 99, and fairly linear but heavily scripted levels that put the player right in the middle of the action with several NPC-controlled team mates always on his side to aid him and add to the atmosphere. The objectives in these missions range from clearing houses from enemies to planting bombs or defend a position. And instead of using medipacks or something similar to heal himself up, the player just needs to get out of fire for a few seconds to regenerate to full health. New this time around is the co-op campaign for up to four players, allowing everyone to play through the whole single player together with friends.

The first campaign begins on August 17, 1942 somewhere on the Makin-Atoll in the Asian-Pacific region where Pvt. Miller sits in a hut and has to watch how his squadmates are brutally murdered by Japanese soldiers. But as one soldier approaches him and prepares for the killing blow, an American bayonet comes out of his stomach. Now the roles are turned and in the following operations Pvt. Miller, under the supervision of Sgt. Roebuck, stills his lust for vengeance by helping the American troops drive back the yellow menace in recreations of real missions like "Operation Watchtower".

The second campaign puts the player in the shoes of Pvt. Petrenko and begins on September 17, 1942 in Stalingrad. Lying in a pool of blood, watching how the Germans put one more bullet in his dying comrades, the private survives and under the helpful guidance of Sgt. Reznov begins his journey through the destroyed city to the main goal: killing General Heinrich Amsel.

The game also features a multiplayer mode similar to the one from Call of Duty 4: Modern Warfare with the playtypes Deathmatch, Team Deathmatch, Capture the Flag, and Search & Destroy in which one team needs to plant a bomb at one of two objectives and the other needs to defend both. The ranking system also makes a return. For every kill or completed objective the player gains experience points and levels up to unlock additional weaponry, attachments or abilities granting a higher accuracy and such. These then can be used to create up to five custom classes in addition to the five pre-defined ones (Rifleman, Light Gunner, Heavy Gunner, Close Assault and Sniper).