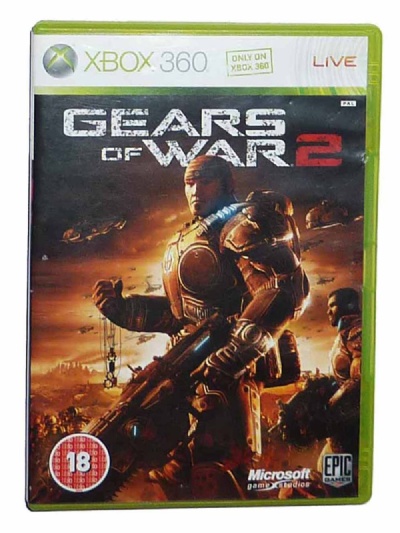 Gears of War 2, the sequel to Gears of War, is a tactical third-person launched exclusively for the Xbox 360 as a spear point for the console's push into 2008's end-of-the-year holiday season.

The game follows up six months after the events of the first game, when the detonation of the Lightmass Bomb managed to destroy most of the invading Locust army. The explosion also affected the environment however, and a disease called rustlung threatens mankind. After a while, giant holes suddenly appear that absorb entire cities at once. When Jacinto, the impenetrable safe haven for mankind, appears to await the same fate, the COG Delta Squad with protagonist Marcus Fenix has to go underground to launch a counter-offensive against the Locust who are behind the disappearances.

Many known faces return to the game, as well as a cast of new support characters. There is a larger focus on the story, picking up on new threads and continuing old ones, with more attention to the history of the Locust and emotional encounters. Again, there are branching paths in certain levels. One of the stories further explored is Dominic Santiago's search for his lost wife Maria. The game's campaign mode takes the player through five acts with large-scale battles in different environments such as ruined cities, but also locations where ice or water is prominently present. During a few sequences there is also vehicular combat. The Reaver riding level for instance has on-rail shooter gameplay.

The gameplay is still focused on the cover system, with the addition of new finisher moves, active reload benefits, new weapons (e.g. grenades that can be turned into proximity mines) and the ability to use enemies as meat shields. Entirely new to the game is mobile cover. There are three types of covers that can be planted at difficult sections to provide extra spots next to the regular scenery. Covers can now be deformed, but not taken away completely.

Next to single-player, there is a cooperative campaign mode (split-screen or online) and each player can set a different difficulty level (based on health and damage). In the regular campaign mode, the simple controls to guide AI team mates have been removed entirely. The multiplayer portion offers fifteen maps (including remakes of existing ones). Online games offers a matchmaking system where players are matched according to their rank. Some of the new multiplayer modes are Submission (get an unfriendly AI character back to the capture point), Guardian (team deathmatch with one player is the VIP - similar to Assassination in the previous game - ; when the player is alive, the other can respawn infinitely, but - new in this mode - when he dies the other players are on their last life), Wingman (ten players are split in teams of two, both as the same character), and King of the Hill (previously only featured in the PC version of the first game).

There is a cooperative Horde mode where up to five players play together in 50 waves of the Locust horde. More camera modes are present in the multiplayer games and players can take photos of the action to upload them to the official website.