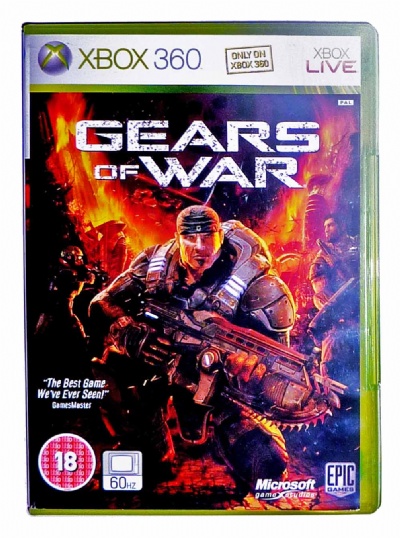 Gears of War is a tactical third-person shooter where the player controls Marcus Fenix, a member of Delta Squad, to save the human inhabitants of the fictional planet Sera from an enemy known as The Locust Horde. The story, played over 5 acts with 30 chapters in total, has the humans reunite their strength after fighting over cheap energy in the Pendulum Wars for many years, to face this new alien threat.

Unlike many other shooters, the emphasis is not on brute violence, but rather team-based actions and cover-dependent tactics. Gameplay requires to look for cover options all the time, from which the player then attacks, along with turns and rolls to quickly pop out. By holding a button, a "roadie run" is performed, to sprint to another location. Marcus is part of a full squad, but another human player can take on the role of Dominic Santiago to fight cooperatively (split-screen, system link or online). At times, the paths will even be split up to face different challenges. Players can only hold two weapons, a sidearm, and a few grenades. There is a selection of submachine guns, sniper and assault riles, grenades, grenade launchers, and pistols, but the main gun is the COG Lancer Assault Rifle, which can also be used as a chainsaw bayonet in close combat. There are also a few exotic weapons, such as the Torque Bow with explosive arrows, or the Hammer of Dawn, to make an orbiting satellite fire a laser at targeted enemies.

All weapons need to be reloaded manually. By timely pressing a button on a meter, the weapon is reloaded, with more damage and at a faster rate with perfect timing, or it gets jammed when timed poorly. Instead of health bar, the game has the Crimson Omen, a cog-shaped icon that fills up with blood when the player sustains damage.

Next to the Co-op multiplayer, there is also Versus, with three game modes: Warzone (deathmatch), Execution (deathmatch, but with the addition of certain "fatalities" to take out enemies completely) and Assassination (team played focused on killing the opponent's team leader).